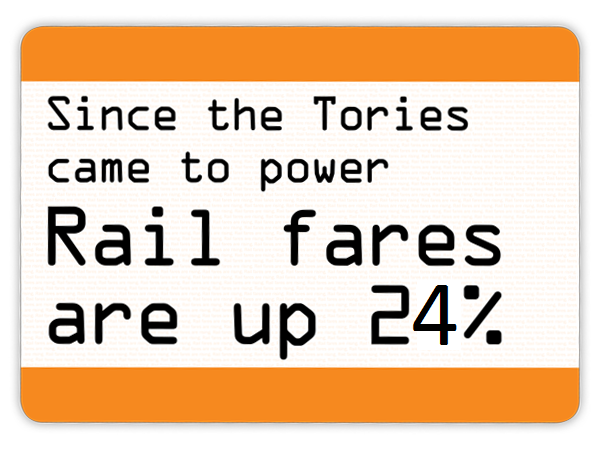 Hard working commuters are now paying 27 per cent more for their train fares under the Tories, because of yet another year of rail fare hikes that come into force today.

The announcement that rail fares will rise again in January 2017 means that passengers in Brentford and Isleworth have been hit by a cost increase of 24 per cent since 2010.

The new fare rises come into effect today [Monday 2nd January 2017]. Figures released by Labour show that the average cost of an annual season ticket is now £594 more than 2010.

With annual season ticket from Brentford and Isleworth to London Waterloo has risen by £244 or 24 per cent since 2010.

Ruth Cadbury, Member of Parliament for Brentford and Isleworth, has slammed the Tory government for hammering passengers and commuters. She said:

“Passengers in my constituency have been hit again and again by eye-watering rail fare rises. Fares have now rocketed by 27 per cent under the Tories, far outstripping any increase in most people’s pay packets.

“For many people here, travelling by train isn’t a luxury, it’s how they get to work every day. A season ticket to London Waterloo, for example, now costs over £244 more every year.

“Labour's policy is to bring the railways into public ownership so they can be run for passengers not profit. That means fairer fares, investment in a 21st century railway and giving passengers a stronger voice."