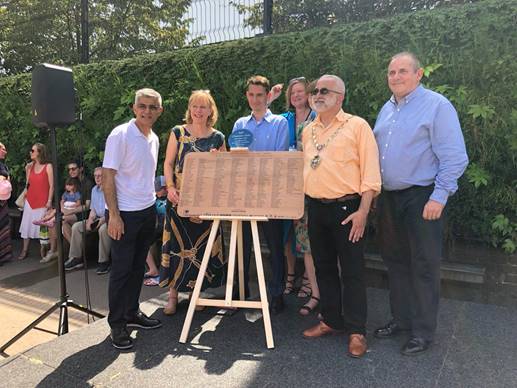 On Saturday St Mary's Primary School launched the UK's longest ever green wall; installed to reduce the amount of harmful air pollution that the school was exposed to.

The new 'Chiswick Oasis' was unveiled by London Mayor Sadiq Khan- whose office had provided £32,000 to fund the wall. Ruth Cadbury MP was joined by Council Leader Steve Curran, Hounslow Mayor Tony Louki, and Cabinet member for communities Cllr Katherine Dunne, and many others in launching the wall.

''It was great to see so many people attend the launch of the Chiswick Oasis this weekend. I want to start by thanking Andrea Carnevali for all the amazing work that he has done in leading the campaign for the Oasis, and also for his work in bringing the whole community together to not only fundraise, but also to raise awareness about the harmful impact that air pollution is having.

Toxic air pollution is linked to 40,000 premature deaths across the UK, and we know that in West London it has a particularly nasty impact on young people, who are exposed to pollution from the M4, and general congestion.

I know that so many people in both Chiswick, and across our community are worried about the deadly impact of air pollution, and I hope that the launch of this great project will push the government to take some real action.''