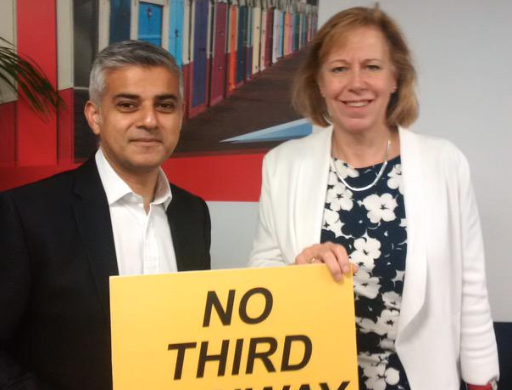 A third runway at Heathrow would be an environmental catastrophe

Under the last Labour Government, the UK was a world leader on environmental issues. This is an area where we cannot shrink away from the world – we must play our part. We must remain committed to meeting our climate change targets, and this core principle of sustainability must guide decisions that are made on investment. This is one of the key reasons why a third runway at Heathrow should not go ahead.
At the moment aviation make sup around 5% of the UK’s emissions. Under the landmark 2008 Climate Change Act, the UK must reduce its carbon emissions by 80% by 2050 compared to 1990 levels. This would mean a maximum level of emissions of 160 Mt of carbon in 2050. The independent Committee on Climate Change suggested that, in order to meet this target, aviation emissions should be no more than 37.5Mt per year – almost a quarter of the UK’s carbon budget in 2050.
Addressing the environmental impact of Heathrow does not simply mean talking in ‘parts per million’ – it means talking honestly about the impact of the airport on the quality of life of hundreds of thousands of people – and some 362 schools – that are directly affected by the airport.
A new runway would mean planes flying overhead for thousands of residents in my constituency - in Osterley, Brentford and Chiswick, who had not previously been directly underneath the flightpath. Other residents already underneath the flightpath for the existing runways would see their respite periods shortened from the current half a day.
Some 320,000 people – a population the size of Coventry – would be newly impacted by noise if a third runway was to go ahead.

The Government will have to address the legal challenge of the air quality levels that already breach EU Air Quality limits. The measures outlined in the Davies commission’s report to bring airport pollution within the limits are simply unfeasible and unachievable. It would be careless to allow the construction of a third runway, on the condition that air quality targets were not breached. In reality, there is no real penalty in place if Heathrow breached those targets – you cannot ‘un-build’ the runway.

If it is deemed that any extra capacity is needed in the south-east, it should come at Gatwick. The issues with carbon targets would remain, however in another key environmental factor, quality of life, Gatwick would be streets ahead, with far few residents impacted by a new runway.

In the local context there is no doubt that Heathrow is a major driver to the local economy, but here, between Central London and the Thames Valley/M4 silicon corridor the growing vibrant non-airport sectors struggle to compete for commercial floor-space, for staff at various skill levels and for space on our increasingly congested roads.

Another runway at Heathrow will fuel pressures to expand even further, first with night flights, to be followed soon after by a fourth runway, whilst the UK’s other airports struggle to compete.

Heathrow is, and can continue to remain Britain's premier airport providing jobs for tens of thousands of local people and the economic stimulus to West London without needing another runway and more flights.